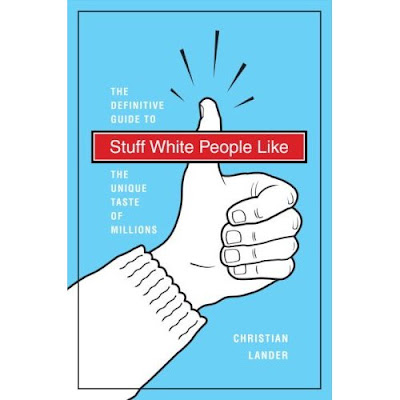 its not all brutal truth & awful revelations here @ the hours set. apparently there's a book & a blog called Stuff White People Like by a guy named Christian Lander, who just happened to be on Late Night with Conan Obrien (the only late night talk show that's even remotely tolerable). the interview was actually pretty funny. this Lander guy kinda sounded like me talking about white people, but in a much safer & cuddlier package.
recently i've been on a quest to figure out how to think like a white man so i can continue to advance my plans for world domination. i've been busy watching lots of Woody Allen movies, the Muse on Bloomberg TV & listening to NPR as much as possible all in an attempt to foster my delicate liberal sensibilities, but little did i know that my man Christian Lander literally wrote the book on all the whimsically ridiculous shit that white people like!

here are some hilarious examples:
#101 Being Offended
#105 Unpaid Internships who else can afford to work for free?
#108 Appearing to enjoy Classical Music
#107 Self Aware Hip Hop References
#97 Scarves
#89 St. Patrick’s Day
#90 Dinner Parties
#95 Rugby
#96 New Balance Shoes
#86 Shorts white folks do seem to really hate wearing coats!)
#82 Hating Corporations
#81 Graduate School
#73 Gentrification there goes the neighborhood!
#72 Study Abroad
#8 Barack Obama
#69 Mos Def
#5 Farmer’s Markets
#1 Coffee this may be true but it seems like #1 should be exploiting brown people
#9 Making you feel bad about not going outside
#20 Being an expert on YOUR culture
#19 Traveling
#12 Non-Profit Organizations
#30 Wrigley Field damn i don't even think this Landers cat is from chicago!)
#28 Not having a TV
#36 Breakfast Places ann sather, clarks & overeasy do always seem to be packed
#40 Apple Products i am the only person i know that has never had an i-anything
#62 Knowing What’s Best for Poor People
#61 Bicycles
#50 Irony its all about hipsters with unicorns or bears hugging on their tshirts
#54 Kitchen Gadgets every time i go to a dinner party i learn about a new one or a vegetable i've never heard of before
#53 Dogs there's definitely plenty of evidence of this on the north side!
#106 Facebook
#104 Girls with Bangs
#11 Asian Girls but then again i've definitely been afflicted with the yellow fever more than a few times myself

i'm surprised that blogging & not saying excuse me in public weren't on the list, but then again i suppose that i'm not an expert!) check out the Stuff White People Like blog for the complete list.

Posted by blackdaylight at 12:36 AM

I'm kinda ticked about the self-aware hip hop references post. A white kid mocking blacks, or hip hop, or whatever isn't white, by throwing up west-side in a party photo is just embarrassing. For one these are the very same hole-asses who created the term wigger in the first place. Wouldn't dare say nigger yet think its perfectly acceptable to call a white kid who emulates black culture a white-nigger, all the while defending themselves with all too popular closet racist escape some of best friends are black. Beyond that, after more than a decade, is it still funny? That shit is as played as..."played". 20 years form now you'll still hear these fucks saying "bling-bling!". As if they ever heard this slang from anything but TV or radio anyway. You know how feel about Bill Mahr, so here's a "new rule": white people should not use black slang unless they've had real life exposure to it, and MTV doesn't count as real-life. I loved one of the comments in that post that said the blog should more appropriately be titled Stuff Yuppies Like. Sorry, maybe I'm just a little bitter for being called a wigger my entire life just because...I don't know...some of my closest friends are black;)

u know i didn't read the "self aware hip hop references" post on their site until just now...in fact its the only one i was thinking about leaving off the list that i grabbed & posted on my blog...i was thinking about heads like u & jesse, but i'll check it out...

5 minutes later:
i just read the original explanation & i gotta say that this is funny as hell:

"This distaste caused a dilemma for white people who had to show both that they loved hip hop but also that they were aware they were white. The brilliant solution they came up with was to appropriate hip hop words and mannerisms and filter them through a white appropriateness system.

For example, white people find it particularly hilarious to take slang and enunciate every word perfectly.

“Homey, that bernaise sauce you made is wack. Do you know what I am saying? For Real.”

“Well, I used a different type of butter. I switched the style up, so let the haters hate and I’ll watch the deliciousness pile up.”

Since the above exchange involves people who are very aware of their whiteness it is hilarious, but if it were to be said by wiggers, it would be tragic. The difference is subtle but essential."