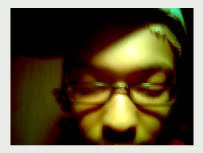 so what's going on with all of these new blackdaylight songs?

they are purposefully crazy, but i think that somewhere along the way i lost control of the wheel & the music has just been doing its thing without me.
it feels almost unfamiliar yet completely enriching...like i'm on the cusp of really tapping into some sort of artistic self actualizing action!
its like how visual artists & the tao te ching describe the feeling of not doing anything & simply allowing the process to happen.
its dangerous because its totally uncertain.

i keep thinking that i would never listen to any of this music unless it was by someone that was known for doing a specific style & this sound was a definite departure from the expected. i keep thinking that...& now i realize that's exactly what's going on with me [but i am completely divorced from most people's artistic radars so its not really the same]...

del says something like: "but music is there without you or me we just manipulate for better or worse..." & that's one of the most eloquent descriptions of what the new songs have been like.*

~dammit! now i feel anxious about sounding pretentious on a blog that no one really reads any way...ha!

*...here's the entire last verse that i was attempting to quote: from deltron 3030's "madness":
Simple minded people always poin't the finger
To bring it to a close as if life is their role, their path
When all paths are intersections
It all depends on the persons perception
When I'm mad as fuck you get shot
& To some its bad luck
I believe you held something back for too long
It grew strong
And enegy has its own will
And people think they make music still
But music is there with out you or me we just manipulate
For better or worse so let it situate
I get to make records and dough
Paid out the ass hole
And still seen as another face on the totem pole
Conquer, my sponsors are monsters
And everybody thinks that I owe them one
I'm glad I love music and life
cuz it's easy to see the pain and strife and end it all tonight
I'm caught in the grip of the city . . . M a d n e s s
Posted by blackdaylight at 1:36 AM